Words Matter: Why I Sometimes Hate the Word “Hate”

Why "hate" is losing its meaning

Every word is comprised of the same two ingredients: one part definition and one part connotation. The problem with the second component is that it changes all the time. As a result, words take on new meanings as people speak them, often deriving more from the context of their usage than from their actual definitions.

This is certainly true of the word “hate,” a four-letter term that seems to make more public appearances these days than Beyoncé. The voluble Brits who publish the Oxford Dictionary define “hate” as “hostile actions motivated by intense dislike or prejudice.” But alas, like many words, it has become another grammatical casualty as some now use it to describe the positions of those who vary from emerging cultural norms.

The word has become even more diffuse of late as it has been increasingly cast into the seemingly ubiquitous phrase, “hate speech.” Anyone who says something negative about anyone or anything favored by the powers that be is now vulnerable of being accused of this travesty—from workplaces to the television airwaves to college campuses. And in The Harm in Hate Speech, Jeremy Waldron even argues that the loosely defined category of “hate speech” should be outlawed because it undermines the “public good” (yet another diffuse phrase).

Of course, “hate speech” is not the only word or phrase made more potent by the inclusion of the h-word. Organizations are branded “hate groups,” groups of people are labeled “haters,” books that a critical mass find distasteful are “hate literature,” those who break the law in a particular way are guilty of “hate crimes,” and someone who can’t seem to bite their tongue can be called a “hate monger.”

The most readily available examples of this derive from the gay marriage debate. Given the personal nature of the issue and the perception among many that the very foundations of our society are at stake, it’s not surprising that the debate conjures tidal waves of emotion. But emotion brings in rhetoric—in this case, the word “hate.”

Consider Blake Mycoksie, founder of TOMS Shoes, who was forced to publicly apologize for speaking at an event hosted by Focus on the Family. The Christian non-profit claims they are “dedicated to helping families thrive,” but is staunchly opposed to gay marriage. A petition hosted by Change.org lamented Mycoskie’s association with what they termed an “anti-gay hate-group.”

Mycoskie rushed to offer an “I’m sorry” in fear of also being labeled a hater or his organization sullied as a hate group:

“Had I known the full extent of Focus on the Family’s beliefs, I would not have accepted the invitation to speak at their event. It was an oversight on my part and the company’s part and one we regret.”

The move against Focus incited other activists to apply pressure to companies like Apple, Microsoft and Delta Airlines to cease their involvement with the Charity Give Back Group (CGCB). When consumers purchase items through the group from over 600 brand retailers, CCBG encourages them to donate to more than 200,000 charities. But listed among them are socially conservative groups that oppose gay marriage.

Ben Crowther, a student at Western Washington University, collected thousands of signatures on a petition against Apple, prompting the removal of iTunes from CGBG.

“I knew that once this issue was brought to Apple’s attention, they would not want to be a part of CVN because it funds anti-gay hate groups,” Crowther said. Microsoft and Delta subsequently caved to pressure.

Our world glorifies tolerance—a virtue that is often scoffed at, but one I believe is quite valuable. But those who champion this characteristic are often quick to abandon it upon encountering people with whom they intellectually diverge. But tolerance is not Lombard Street; it is bi-directional. Passionate advocates on both sides of contentious issues must avoid extreme rhetoric in attempts to oust their ideological foes. 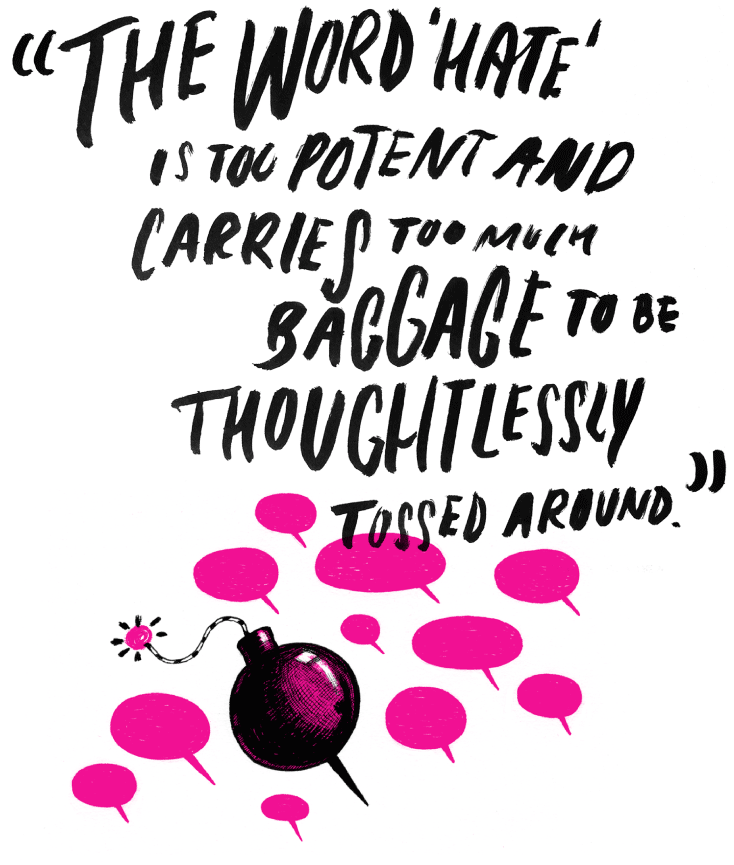 Hate is real, of course, and some people do harbor it against others. This is a point that must be made with clarity. Hate is not a myth or a fable. It is not gold spun from straw. But we’re quickly approaching a moment, if we’ve not already reached it, where true hate is conflated with any opinion we simply don’t care for. We cannot assume that someone who, for example, holds a different view of how marriage should be defined is necessarily “motivated by intense dislike or prejudice” for those who disagree with them.

American Christians and political conservatives must surely wrestle with a sordid history on same-sex issues. In years past, some opposed funding for HIV research and medical aid because they viewed the illness as God’s judgment on sexual immorality. Worse still, the faithful have often employed angry, reactive and, yes, even hateful rhetoric when speaking about LGBTQ persons. But we do a disservice to actual hate and malice when we do not differentiate between hateful actions and differing opinions voiced passionately but civilly.

In fact, it is the fast and loose use of “hate”—or what Slate writer Mark Peters calls “criticism shaming”—that should refocus us on the behaviors and rhetoric that actually qualifies as such. From epithets that demean racial and sexual minorities to calls for violence against others, there is enough actual “hate” in the world to busy the hands of those truly concerned about the problem.

As Jim Daly rightly responded to the TOMS controversy, “‘Hate’ is too big a word to be thrown around with so little discretion. It is a damaging and dangerous thing to hang such an emotional epithet on a person or group because they think differently about some issues than you do.”

The word “hate” is too potent and carries too much baggage to be thoughtlessly tossed around. Those engaged in public discourse must display better judgment in the words they choose. The importance of the issues our society now faces demands our commitment to intelligent, winsome, and precise language.

Jonathan Merritt is the author of three critically-acclaimed books, as well as contributing writer for The Atlantic, contributing editor for The Week, and senior columnist for Religion News Service. Jonathan resides in Brooklyn, NY.